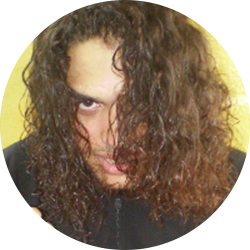 Sinister reigned supreme as the WFA champion throughout 2004 and did whatever he wanted to do whenever he wanted to do it. When Crazy Fist won the Royal Park Rumble, he went on to face Sinister at Wrestlefest II and ended up being the only person that could stop Sinister.

In 2005, he aligned himself with Jason Kross and Enforcer and began to reign in not only physical but also political power over the federation. After winning the Brooklyn Hardcore Title, it wasn’t until Wrestlefest III that Sean Sation was able to beat Sinister for the title. In frustration from his loss, Sinister and Jason Kross decided to take it out on Enforcer and they kicked him out of Team Kross.

Still aligned with Jason Kross, Sinister began to enjoy the crowd reaction he was receiving but did not expect the problems that would come his way. With the return of Enforcer who was seeking vengeance against Kross and Sinister, the buildup to this monumental match came to a close at Wrestlefest IV when Enforcer was able to beat Sinister, causing him to be fired from WFA.

In 2008, Sinister had discovered a new lair for himself and continued on his destructive path of WFA. Returning with a new look and new attitude, Sinister targeted Twiztid and eventually became wrapped up in matters with the Higher Society because Impact threatened to reveal the origins of Sinister to the world. By 2009, Sinister was back on track to capture the Interborough Title from Enforcer and he carried his title through several opponents like Caution and Mike Hardy in the end.