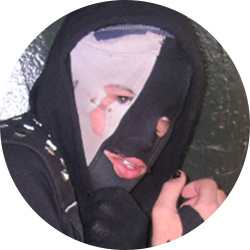 Finisher: None
Theme Song: Korn & Slipknot – “Queen of the Damned”

Hailing from XSW, Malice never quiet found his place in WFA. Some may say he isn’t all there but rest assured Malice could not hurt even a fly. He debuted in WFA in 2006 hoping to make friends out of the WFA superstars, but ever corner he turned led to him losing matches and making enemies.

Malice took a liking to one superstar in particular and began parading around as his biggest fan. At the time Impact did not like Malice nor appreciate Malice’s grace as his biggest fan. Malice hoped to one-day face off against his biggest hero but when push came to shove, Impact was relentless on his attack against Malice.

Malice came to a realization, which was that Impact was a very, very bad man. He continued on his search to make friends in WFA but was even looked at as a weirdo by one of the biggest weirdo’s ever, the Masked Wombat. Malice competed in the Royal Park Rumble and though he did not win he was able to give the rest of the superstars a little relief knowing that in actuality they were competing against 29 other superstars instead of 30.